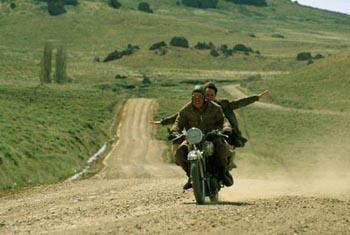 Diarios De Motocicleta also known as The Motorcycle Diaries is an adaptation of a journal written by Ernesto “Che” Guevara (Bernal) when he was 23 years old.He and his friend, Alberto Granado (de la Serna) are typical college students who, seeking fun and adventure before graduation, decide to travel across Argentina, Chile, Brazil and Peru in order to do their medical residency at a leper colony. The film begins as a buddy/road movie in which Ernesto and Alberto are looking for chicks, fun and adventure before they must grow up and have a more serious life. As is said in the film itself, it’s about “two lives running parallel for a while.” The two best friends start off with the same goals and aspirations, but by the time the film is over, it’s clear what each man’s destiny has become.  The movie can be found on Netflix.