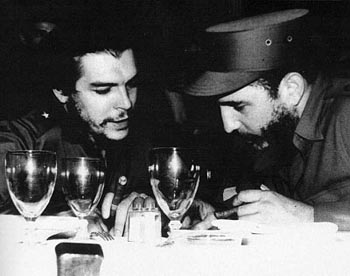 This is the translation of the (in-) famous ‘Carta de Despedida’ or Goodbye Letter of Che. This letter had to be read after Che’s death but Fidel read it, while Che was in the Congo. This made it really hard for Che to return to Cuba.

Many, Many, people say & said this was the political murder of Che. What do you think? Drop me an email…

At this moment I remember many things: when I met you in Maria Antonia’s house, when you proposed I come along, all the tensions involved in the preparations. One day they came by and asked who should be notified in case of death, and the real possibility of it struck us all. Later we knew it was true, that in a revolution one wins or dies (if it is a real one). Many comrades fell along the way to victory. Today everything has a less dramatic tone, because we are more mature, but the event repeats itself. I feel that I have fulfilled the part of my duty that tied me to the Cuban revolution in its territory, and I say farewell to you, to the comrades, to your people, who now are mine. I formally resign my positions in the leadership of the party, my post as minister, my rank of commander, and my Cuban citizenship. Nothing legal binds me to Cuba. The only ties are of another nature — those that cannot be broken as can appointments to posts. Reviewing my past life, I believe I have worked with sufficient integrity and dedication to consolidate the revolutionary triumph. My only serious failing was not having had more confidence in you from the first moments in the Sierra Maestra, and not having understood quickly enough your qualities as a leader and a revolutionary. I have lived magnificent days, and at your side I felt the pride of belonging to our people in the brilliant yet sad days of the Caribbean [Missile] crisis.

Seldom has a statesman been more brilliant as you were in those days. I am also proud of having followed you without hesitation, of having identified with your way of thinking and of seeing and appraising dangers and principles. Other nations of the world summon my modest efforts of assistance. I can do that which is denied you due to your responsibility as the head of Cuba, and the time has come for us to part. You should know that I do so with a mixture of joy and sorrow. I leave here the purest of my hopes as a builder and the dearest of those I hold dear. And I leave a people who received me as a son. That wounds a part of my spirit. I carry to new battlefronts the faith that you taught me, the revolutionary spirit of my people, the feeling of fulfilling the most sacred of duties: to fight against imperialism wherever it may be. This is a source of strength, and more than heals the deepest of wounds. I state once more that I free Cuba from all responsibility, except that which stems from its example. If my final hour finds me under other skies, my last thought will be of this people and especially of you. I am grateful for your teaching and your example, to which I shall try to be faithful up to the final consequences of my acts. I have always been identified with the foreign policy of our revolution, and I continue to be. Wherever I am, I will feel the responsibility of being a Cuban revolutionary, and I shall behave as such. I am not sorry that I leave nothing material to my wife and children; I am happy it is that way. I ask nothing for them, as the state will provide them with enough to live on and receive an education. I would have many things to say to you and to our people, but I feel they are unnecessary. Words cannot express what I would like them to, and there is no point in scribbling pages.

Ernesto Guevara got married trice and had six children.
His first marriage was with Hilda Gadea in August 18, 1955 in Mexico and they had a daughter named Hilda Beatriz Guevara Gadea (1956-1995), born February 15, 1956.
Che divorced Hilda in 1959. His second marriage was with Aleida March Torres on June 9, 1959 in Habana, Cuba.