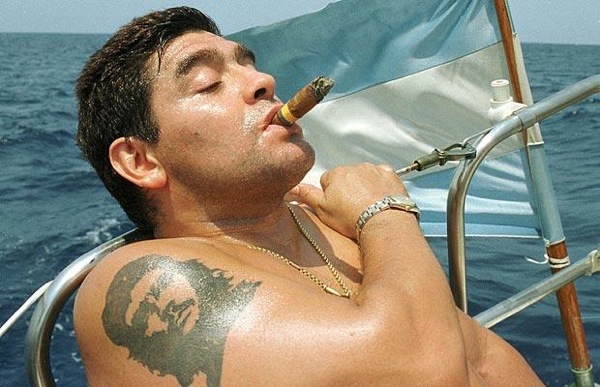 Diego Armando Maradona was born on October 30, 1960, in Villa Fiorito, a province of Buenos Aires, Argentina. The fifth of eight children raised by Diego Sr. and Doña Tota, Maradona grew up in a poor but close-knit household. He received his first soccer ball as a gift at age 3 and quickly became devoted to the game.

At 10, Maradona joined Los Cebollitas, a youth team of Argentinos Juniors, one of the biggest clubs in Argentina. Showing his prodigious ability at an early age, Maradona led Los Cebollitas to an incredible 136-game unbeaten streak. He made his professional debut for the senior team shortly before his 16th birthday.

A short but fearless midfielder renowned for his ability to create scoring chances for himself and others, Maradona led club teams to championships in Argentina, Italy and Spain.

The pinnacle of his career came as a member of the Argentinean national team that won the 1986 World Cup. His performance there included two memorable goals in a quarter-final victory over England: The first was scored illegally with his left hand, which Maradona later claimed was the work of “the hand of God”; the second required no supernatural help, other than an otherworldly ability to dribble past an onslaught of defenders to find the back of the net. Altogether, Maradona played in four World Cups, and scored an impressive 34 goals in 91 international appearances for Argentina.

Despite his unquestioned brilliance on the pitch, the emotional Maradona became equally well known as a highly controversial figure. He became addicted to cocaine while playing in Spain in the 1980s and received a 15-month suspension after testing positive for the substance in 1991. Maradona endured another high-profile suspension three years later, this time for testing positive for ephedrine during the World Cup.

Maradona spent the twilight of his playing career in his home country, his physical skills diminished by mounting injuries and years of hard living. He announced his retirement on the eve of his birthday in 1997.