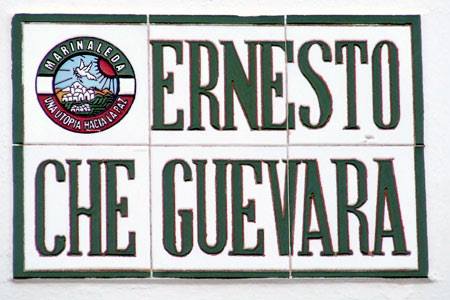 DONDE ESTAN LAS CALLES DEL CHE GUEVARA? WHERE ARE THESE STREETS IN THE WORLD? DID YOU KNOW THAT.. The writings of Cuban Revolution leader Ernesto “Che” Guevara have been added to UNESCO’s Memory of the World Register. In this July 7, 2008 file photo, manuscripts and photographs belonging to Cuba’s revolutionary hero Ernesto “Che” Guevara are displayed for the press in La Paz, Bolivia. UNESCO is including the writings of Cuban Revolution leader Ernesto “Che” Guevara in its Memory of the World Register. The documents include original manuscripts from “Che’s” youthful “Motorcycle Diaries” days, to his diary from the mountains of Bolivia where he was executed by that nation’s military in 1967.

The documents include original manuscripts from “Che’s” youthful “Motorcycle Diaries” days, to his diary from the mountains of Bolivia where he was executed by that nation’s military in 1967.
They are now recognized as world heritage and will be protected and cared for with the help of the United Nations Educational, Scientific and Cultural Organization.
The Memory of the World Register comprises nearly 300 documents and collections from five continents. Guevara’s works are among 54 new additions this year.
His widow, daughter and son were on hand at a ceremony in Havana on Friday to celebrate the inclusion of the documents in the register. What was Che’s date of birth?
14 May 1928. Before those aware of the date on Che’s birth certificate (14 June 1928)reach for the ‘correction’ button, I would point out that his mother (when interviewed by his main biographer Jon Lee Anderson) admitted that, in order to hide the fact that she was three months pregnant, when marrying Che’s father, Che’s birth was registered a month later than the actual date. Though later universally known as Che, what first name did his parents give to their first born child?
Ernesto. Ernesto was the name of Che’s father whilst Roberto was that of his grandfather. From childhood until his death, Che suffered from a chronic disease that – at times – badly affected his performance of medical and military duties. Which? Asthma. Its says something for Che’s force of character that he threw himself wholeheartedly into every one of his various projects whereas he could have – quite justifiably – used his serious medical problem as an escape clause. Despite his medical condition, Che was said to be an enthusiastic, if unskilful sportsman.

Who was Che’s companion on the motorcycle tour of South American countries started in 1952 and the subject of Che’s journal ‘Notas de Viaje’ and the film ‘The Motorcycle Diaries’?
Alberto Granado. The greater part of the journey was completed other than on a motorcycle as the machine unretrievably broke down fairly early on. The ‘incorrect’ names quoted all played some part in Che’s life although, not necessarily, to his benefit. In which city did Che first meet Fidel Castro?
Mexico City. Fidel Castro had taken part in an unsuccesful plot to overthrow Batista and had been arrested. A death sentence on him had been commuted to solitary imprisonment through the intervention of the Catholic Church. When Batista sought ‘legitimacy’ by planning elections, Castro was released under an amnesty. His campaigning against Batista made Cuba an unsafe place for him so he followed his brother Raoul to Mexico City where he met Che in July 1955.

What was the name of the ship in which Che, Castro and others sailed from Mexico to Cuba in November 1956 to initiate the revolution against Batista?

Granma. Apparently, they were lucky to have landed on Cuban shores at all because the ship was a floating ‘death-trap’.

Shortly after the successful conclusion of the revolution, Castro despatched Che on a three month trip to meet various world leaders. Which of these did he meet?

All of them (Gamal Abdel Nasser of Egypt, Josef Broz Tito of Yugoslavia, Jawarharlal Nehru of India). It was suspected that his first few months of running Cuba, Castro wished to give the impression that the revolution was not Communist led so wanted to get Che away from the limelight.


Although working extremely hard as Minister for Industries, Che volunteered to take on another important post. Which?
President of the Cuban National Bank. In Spanish, the word for ‘economist’ is very similar to the one for ‘communist’. Che claimed that he thought Castro had said at a Cabinet meeting that he’d wanted a good communist to take charge of the bank so volunteered and, suprisingly, got it! Apparently, Che worked so hard at both jobs that he worked through the night as well as day and people turning up for appointments at three in the afternoon were informed that their appointment had been for 3 a.m! Che got married for the second time in Cuba. What was his wife’s name?

Aleida March. Hilda Gadea was Che’s first wife who he married in Mexico City. He fell in love with Aleida during the revolution and when they worked together in the Instituto Nacional de Reforma Agraria and Hilda agreed to divorce Che although they had not formally separated. Celia Sanchez was Castro’s partner and ‘Tania’ Bunke was a German Communist who interpreted for Che when he visited East Germany and later participated in the Bolivian revolution.