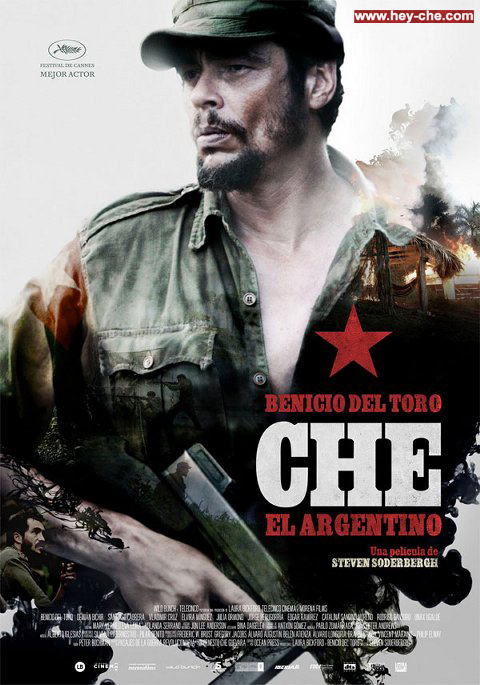 The film opens with Che as one of the important figures in the growing Cuban rebellion led by Fidel Castro. The movie charts how the two successfully built an underground army large enough to successfully overthrow the government of Fulgencio Batista. Soderbergh and Del Toro team up again for a second biopic of Guevara titled Guerrilla, a movie that focuses on his life in the years after the Cuban revolution. ~ Perry Seibert, All Movie Guide. ‘A GREAT MOVIE. ‘CHE’ IS A THING TO BE EXPERIENCED. J. Hoberman – Village Voice

‘NOTHING IF NOT THE MOVIE OF THE YEAR. Scott Foundas, LA Weekly

CHE GUEVARA | THE ARGENTINE & GUERILLA
November 26, 1956; led by Fidel Castro (Demian Bichir), a band of 80 rebels sails to Cuba. Among these young rebels is Argentine physician, Marxist, soldier, Ernesto “Che” Guevara (Benicio Del Toro). Nation-less, strapped for resources and fueled only by determination, the group engages in swift, bloody battle to free the Cuban people from the corrupt dictatorship of Fulgencio Batista. Che and his soldiers wrestle the nation’s resources and affection from Batista’s grasp. Though considered a hero by some, Che becomes a hugely controversial figure. At the height of his fame and power, he disappears. Entering South America incognito, Che recruits another band of guerilla fighters in the harsh Bolivian jungles. They embark upon a mission to spark revolution throughout Latin America. Soderbergh plans double Che Guevara biopic Steven Soderbergh has always wanted to direct a biopic about Che Guevara – and now he’s compensating for the wait by planning not just one movie, but two. The Traffic director will shoot two movies about the life of the iconic Argentine-born revolutionary. In addition to Guerrilla, which was announced earlier this year, Soderbergh will make another film. The Traffic director will shoot two movies about the life of the iconic Argentine-born revolutionary. In addition to Guerrilla, which was announced earlier this year, Soderbergh will make another film called The Argentine, reported Variety. Benicio Del Toro will play Guevara in both movies. The Argentine will focus on the Cuban revolution, from the moment Fidel Castro, Guevara and other revolutionaries landed on the Caribbean island until they toppled the dictatorship of Fulgencio Batista two years later. Guerrilla will focus on the years following the Cuban revolution beginning with Guevara’s trip to the UN headquarters in New York in 1964, until his death in the Bolivian mountains in 1967. Soderbergh will shoot Guerrilla and The Argentine back to back, with most of the dialogue in Spanish.

Everyone know the Icon | Few know the man… “I think anyone who buys a t-shirt of Che has gotta be cool. If I see someone with a Che t-shirt, I think, ‘He’s got good taste’.”
— Benicio del Toro, portrayed Guevara in the 2008 biopic Che

Che in other movies:
In the 1998 film Fear and Loathing in Las Vegas, Johnny Depp depicting Hunter S. Thompson awakens from an adrenochrome overdose and stands in front of a picture of Che Guevara stuck to a Mexican flag. Benicio del Toro who co starred in the film (and would later play Che Guevara in Che), has stated that Thompson kept a “big” picture of Che in his kitchen.

Indian actor Rajat Kapoor was made up to resemble Guevara in the 2009 Bollywood thriller Siddharth-The Prisoner. In describing the reasoning, director Pryas Gupta stated that the central concept of the film is “freedom from the complexities of life” while remarking “who better than Che Guevara, to represent that spirit.”
James Benning utilizes Richard Dindo’s documentary Ernesto Che Guevara: The Bolivian Diaries to form his own 1997 avant-garde film titled Utopia. The film juxtaposes Che’s vehement opposition to imperialism, with the importing of low wage Mexican laborers in the California desert to farm the Imperial Valley. The 1983 Yugoslavian film Kako sam Sistematski Uništen od Idiota (How I Was Systematically Destroyed by an Idiot), directed and co-written by Slobodan Šijan, prominently revolves around the ideas of Che Guevara. In the film, the character Babi Papuška, played by Danilo “Bata” Stojković, is searching for a real revolutionary society and a real revolution. The film opens and closes with Babi reciting a poem at rallies in Che’s honor.
Leandro Katz’s 1997 film essay El Día Que Me Quieras (The Day You’ll Love Me) is a meditation on Freddy Alborta’s famous post-mortem photo of Che Guevara. Katz deconstructs and re-photographs the famous picture while drawing comparisons to the classic paintings of Mantegna’s “Dead Christ” and Rembrandt’s “The Anatomy Lesson”.