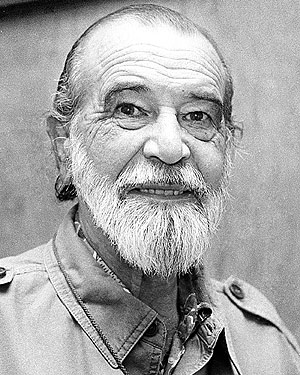 Korda, whose real name was Alberto Díaz Gutiérrez, was born on 14 September 1928 in Havana, Cuba. He got his first taste of photography when he took his father’s Kodak 35mm and began taking pictures of his girlfriend.

Korda was the son of a railway worker, and took many jobs before beginning as a photographer’s assistant. Korda began his career as a photographer who shot pictures at banquets, baptisms and weddings. He would run back to his studio to develop the film, then return to the event and sell his photographs as a souvenir.

The quality of Korda’s work as a beginner was very poor; after a few months the image became blurry and the paper yellowed. When he opened his first studio Korda had an opportunity to learn from his mistakes and to stop the yellowing process by using the right chemicals for the correct durations of time. In 1953 Korda opened his first studio with a photographer named Luis Pierce. Initially Korda and Pierce took a variety jobs ranging from fashion to advertisements.

Most of the jobs were photographed by his studio partner, in order to keep their business going. It was the money generated by these jobs that allowed Korda to develop his unique style of looking at an image from another angle, different from the traditional photographer’s studios.

It was this style that Studios Korda quickly became identified with achieving.

In the early years Korda was most interested in fashion because it allowed him to pursue his two favorite things, photography and beautiful women.

Korda became Cuba’s premiere fashion photographer. Korda disliked artificial lighting he said it was “a travesty of reality” and only used natural light in his studio. He was master of black-and-white photography who looked for perfect composition and framing. Korda had unique creative ambition that he used to rise above in style when compared to the unimaginative cultural perspective of traditional Cuban photography.

This unique creativity turned the Korda Studio into something more than just a prosperous business; it became an art studio.[3] “My main aim was to meet women”, he once confessed.[citation needed] His second wife, Natalia (Norka) Menendez, was a well known Cuban fashion model.

The relationship between Fidel Castro and Korda could not be defined by one label or title. For Castro, Korda was more than an official photographer, a friend or personal photographer. They never discussed the salary or the title, their relationship wasn’t boss and worker. Thus, Korda was very relaxed, and interested in everything and everyone. Every photo he took was a symbol of the revolution, instead of a documentary of the events of the revolution. The Cuban Revolution was the turning point in Korda’s career. His career plans were completely changed with the success of the revolutionaries. In 1959 the newly established newspaper offered the largest space for photographers to display their photographs, and Korda became part of the revolutionary cause. Korda Says, “Nearing 30, I was heading toward a frivolous life when an exceptional event transformed my life:

The Cuban Revolution. It was at this time that I took this photo of a little girl, who was clutching a piece of wood for a doll. I came to understand that it was worth dedicating my work to a revolution which aimed to remove these inequalities.” He got caught up in the ideals of the revolution and began photographing its leaders. As Revolution photographer Korda always worked at his own photographic tempo. He wasn’t pushed by the press or by any other requests. Where ever the revolution took Castro Korda followed. One of Korda’s most recognizable images was of Castro’s visit to the Lincoln Memorial in Washington, D.C. in April 1959. Castro’s travels took Korda all around Cuba, overseas, and the Soviet Union. In 1963 photos of Fidel and Nikita Khrushchev, taken by Korda, illustrated the differences in both men that were evident in their respective politics. In 1959 Fidel went back to the Sierra Maestra, the remote mountain region, where the revolutionary army began its attacks on the army of the Fulgencio Batista regime. Korda’s style was to move to the front of whatever group Fidel was leading in order to get the shots he wanted. When Korda came back to his home, his daughter couldn’t recognize him. His hair and beard were long and hadn’t showered for months. Korda took many pictures for the newspaper and called the series “Fidel Returns to the Sierra.”

Fidel always liked Korda’s photos and never stopped him when he attempted to take his picture. He worked freely without thinking about political consequences, in order to get what he wanted in his photos. Korda was a photographer for the Cuban newspaper Revolución when he produced on March 5, 1960 the iconic image of Che Guevara that became a worldwide symbol of revolution and rebellion. He never received any royalties for the image, because Castro did not recognize the Berne Convention for the Protection of Literary and Artistic Works.

In 2000, he sued Smirnoff over the use of the image in advertisement. Commenting on the illicit use of his photograph, the artist said, “As a supporter of the ideals for which Che Guevara died, I am not averse to its reproduction by those who wish to propagate his memory and the cause of social justice throughout the world, but I am categorically against the exploitation of Che’s image for the promotion of products such as alcohol, or for any purpose that denigrates the reputation of Che”. His out-of-court settlement of US $50,000 was donated to the Cuban healthcare system. He said,

“If Che were still alive, he would have done the same”. However, he told a BBC World Service reporter that he did approve of the 1999 Che Jesus adaptation of the image used by the Churches Advertising Network to promote church attendance in the UK. The truth is that Korda gave the picture for free to Giangiacomo Feltrinelli, an Italian publisher who had published Doctor Zhivago and went on to publish Castro’s diaries. After the revolution, Korda became Fidel Castro’s personal photographer for 10 years, accompanying Castro on trips and in meetings with foreign personalities. During this time he also took pictures of demonstrations, sugar cane harvests and factory scenes.

Other less-known Fidel Castro images by Korda include shots of Castro staring warily at a tiger in a New York zoo, playing golf and fishing with Che Guevara, skiing and hunting in Russia, and with Ernest Hemingway. Korda’s work also includes pictures of Castro’s rebels riding into Havana after their triumph, and one known as The Quixote of the Lamp Post showing a Cuban wearing a straw hat and sitting on a lamp post against a sea of people during a rally. From 1968 to 1978 he concentrated on underwater photography until a Japanese exhibition in 1978 stimulated international interest in his work. He appeared briefly in the pre-title sequence of Wim Wenders’ film Buena Vista Social Club in 1999, although he was uncredited.

Korda suffered a fatal heart attack in Paris in 2001 while presenting an exhibition of his work. He is buried in the Colon Cemetery, Havana.